A House is in the House

I want to tell you about our most recent endeavor. It’s been a year in the making. Like all great ideas, it started out as just an idea, a notion really. This idea evolved next into the stage of talking an idea to death–which, as you can imagine, is a stage which we excel at. The talking, which lasted no less than 8 months, consisted of many, many conversations. Did I say many? And then we googled and researched. Oh, and there were drawings, and more drawings. We pondered proportions and scale. We bickered and debated and probably ate a lot of snacks. All of this rigamarole was followed by a search for the materials. And finally the construction.

I know. You have no idea what I’m talking about, do you? I was trying to build up some drama.

Here’s what we were going for – Think abandoned house in the middle of a grassy field. Think country chapel. Think Little House on the Prairie meets the Dust Bowl meets…. something happier than the Dust Bowl. Classic America, flags, fresh grown tomatoes and apple pies, “amber waves of grain”. Okay, do you have that image? That’s what we wanted. Something like this….but not this:

It was our good friend Jamie made this idea a reality. He took our sad little drawing of Americana scribbled on a napkin and knocked it out of the park. If you’ve ever been in our store, you have touched his work…or rather, walked on his work. He laid down our old floors and then built the new ones that fill more than half the store (actually he was responsible for a lot of the new store). Anyway, obviously this guy is good. And he has the patience of a saint, which, I assure you, is required to work with us. He found the materials, interpreted the piles of napkins that our plans were drawn on and proceeded to build this thing in his yard. And then a few weeks later a house rolled up to our store on a trailer–can you imagine passing that on the highway?

The snapping together of this building was not a snap; it was sort of an ordeal… especially getting it through the back door.

We were very excited to see the first wall up. To see an idea take life is a feeling like no other, especially when it meets, no, exceeds your expectations. This feeling kept Van Gogh painting despite making no income and Dr Frankenstein stitching even though his monster was, well, becoming a monster. Okay, maybe that’s a bad example. I’m just saying, making stuff is fun.

Wanna see the whole process? Well, we are here to entertain you. Once again, we had a perfect opportunity to play with the time lapse feature on the phone. So, here’s the result–a pretty cool video of the idea that finally became a reality.

You know that feeling you have when something turns out to be exactly as wonderful as you hoped for? We are swimming in that. Come see it in person. 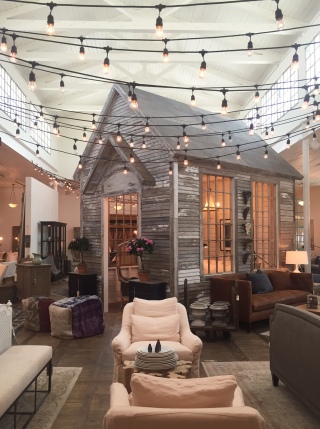